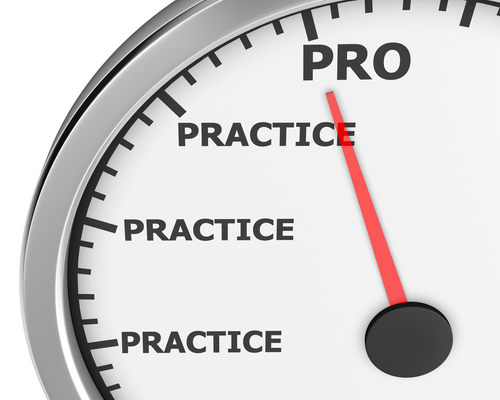 Practice makes perfect…or does it?

Practice is a bit of a misleading term here because it has multiple meanings.  According to the OED online, it can mean a habitual or customary performance; something you do every day without even thinking about it, e.g. its common practice for me to have a cup of coffee before I start work in the morning.  However, the OED also says that practice can mean, “A repeated performance or systematic exercise for the purpose of acquiring skill or proficiency.”  This is quite different.  I don’t set out each morning to make a cup of coffee in order to become better at making it, a star barista; in fact, some days, I make a pretty crappy cup of coffee.   So then, there must be a difference between what is achieved when we habitually or routinely repeat the same task over and over again and when we actually set out to improve how we do something by “practicing” the skill.

Thinking about the world of sport, Chris Froome triumphed in the Tour de France by riding better and faster than any of the other competitors.  He practiced those skills and it paid off.  However, every day I see hundreds of cyclists commuting to work, kids riding their bikes to work, work out junkies peddling in the gym, yet, in all likelihood, very few (if any) of them will go on to win competitive cycling championship titles.  Why is this?  What makes Froome get better and better, but the same results are not seen in the masses getting on their bikes every day?  It is that key difference between habitual repetition and systematic performance.

When we practice a skill with the express intention of improving the quality with which that skill is performed, we do things rather differently than just repeating the same thing over and over again.  We look at strengths and weaknesses of our performances, consider ways in which we might improve, we measure output and we set targets.  Froome didn’t just go out on his bike for a few hours each day, he likely had a training plan or programme, a coach, a training partner, sought feedback,  was highly self-aware of his performances and proactive in attaining his improvements. He practiced with the intention of perfecting skills and getting better!

Thinking about your business, what skills do you as the business owner and leader have to develop and perfect in order to be a great leader?  How often do you set out to intentionally practice these skills? And what about your team?  Perhaps your sales person has been making phone calls for years, but have they ever really practiced this skill or have they just been left to habitually repeat the same phone calls over and over again?  Isn’t that supposed to be the definition of madness?  Doing the same thing over and over again and expecting different results?

Practice can indeed make perfect, but only if it’s the right sort of practice.  Which sort of practice will you instill in your business and what effect is it likely to have on your success…well that’s up to you now, isn’t it?

For help, ideas and team training exercises, feel free to get in touch.

Do you invest time in getting to know the person behind the profile?